Diaper Rash Through The Ages

New moms, seasoned moms and super moms agree diaper rash is a nasty little invader. It can show up overnight without warning on an otherwise perfect tushie. Since you’re constantly changing diapers and cleaning your baby’s sensitive skin, diaper rash can make that process a painful ordeal for baby and parents alike.

Obviously, it occurs during your baby’s diaper-wearing years, which is from newborn until toddler. Depending on what age your child is potty trained can determine exactly how many years she’ll be in diapers - typically anywhere from three to four years.

According to studies conducted by the American Academy of Pediatrics, the most common age diaper rash appears is between the ages of 9-12 months, although ages vary from baby to baby.

Remember, one of the reasons diaper rash happens is because your baby’s skin is physiologically different than that of an older child or an adult. It’s more vulnerable to irritation.

Most of the time diaper rash coincides with something else happening in your baby’s world, whether it’s a growth spurt and her diapers are too tight or she’s transitioning from breast milk to formula or she recently took an antibiotic.

One reason newborns may get diaper rash is because they simply spend a lot of time in diapers – like 24/7. And new parents may not know how frequently diapers need to be changed. Hint: it’s a lot more than you think! Plus, newborns don’t need to be bathed every day, so they may not get enough drying time for their diaper area skin. New parents may not clean up as vigorously after messy diapers because they don’t want to be too rough. Newborns have the umbilical cord for a while – the diapering learning curve may be the culprit.

Growth spurts happen a lot which means your baby’s diapers are simply too tight and the friction (and wetness) is causing irritation. If you can’t figure out why diaper rash has appeared, it could just be time for a bigger size diaper. If diapers are too snug, there’s nowhere for the mess to go, so baby needs a little wiggle room.

When it comes to what causes diaper rash, lots of moms swear teething is a culprit. Teething can start as early as 2 months even though you might not see teeth until later. If you read comments from moms in parenting forums or online discussions about baby care, moms say they noticed diaper rash during the teething days. This could be because some babies just struggle when they’re teething. They get upset tummies or don’t sleep well or eat well – perhaps symptoms of teething (like diarrhea) throw off the pH balance in baby’s sensitive skin.

Changes in your baby’s diet can cause diaper rash to appear during these ages. If your baby is transitioning from breast milk to formula or from formula to solid foods, you could see diaper rash. Certain types of foods are more likely to cause diaper rash like acidic foods – oranges and tomatoes. Sometimes it can be certain foods consumed by breastfeeding moms that are passed to baby through breast milk.

As your baby gets bigger and keeps expanding her diet, you may still see diaper rash. Sometimes the introduction of new foods can trigger diaper rash. Plus, if she needs to take antibiotics, that could be the culprit. Again, this could be true for some babies due to slight side effects from medication that make babies skin more susceptible to skin irritation.

What Can Trigger Diaper Rash?

What’s tricky about diaper rash is it can present itself in a variety of ways and there are lots of factors that determine what the diaper rash might look like.

Your detective skills may help you figure out what’s causing it, but don’t be worried if it all looks the same to you. Just reach for Boudreaux’s Butt Paste® and you can kick diaper rash to the curb quickly! 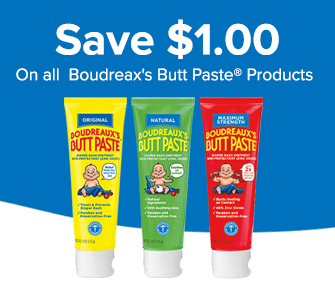